I thought I’d share this conversation with you all, to demonstrate my awesome family:

In other news, this is the calm before the storm of my father’s wrath. Stay tuned for updates as I go though the most exciting few weeks of my life! yet another fun family bonding experience! this regularly scheduled battle.

Posted in Uncategorized | No Responses »

Here are the promised pictures of my lovely kitty, Svara: 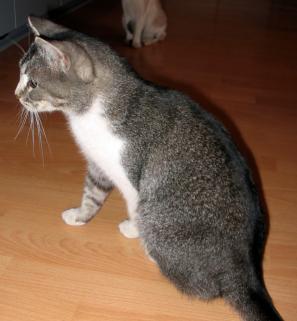 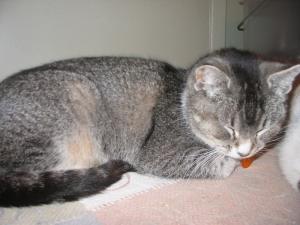 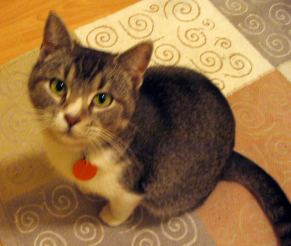 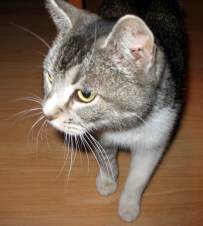 Sorry they look rather… artistic. Cats aren’t easy to photograph you know.

These pictures are from the first day we brought all three cats we rescued home. You can see the one that went to Elizabeth’s friend (that I called Little One, for lack of a name, and since it was 6 months younger than the other two) in the background of the first picture of Svara. Katie took Svara’s sister and called her Hannah, and they are madly in love, much like Svara and I.

I can’t talk for long because I’m about to go out and buy myself some Legos for therapy purposes.

I can sum up my feeling right now by just saying that I hate college, I hate the fact that I can’t get my academic life together, and I hate what my future looks like. I also hate the fact that I am expected to ignore certain things and devote my entire being into academia at this point in my life. Sure, education is important, especially now, but is it wrong if I completely disagree with society on the fact that every decision I make during this time should be to further my academic career, my future professional career, and increase my chances of landing the perfect job? Is nothing else important? Since when did being in clubs make you a well-rounded person – I want to apply to my potential medical schools and say ‘As you can see, I was not in any clubs in college – I was far too busy cultivating real and meaningful relationships with a few select people, most of whom I have known for many long years, as opposed to spending my time pretending to be sociable with people I share perhaps one common interest with.’
I have so much stress in my life, and I hate it. I feel like the times I’ve seriously fucked up in the past year and a half have ruined any chance I have of being a doctor. Society has told me this, and I don’t know if it’s true. Is it? Is it not? I know in my heart I would be a great doctor – give me a chance and I’ll prove it to you. But will anyone give me a chance? Or should I just give it all up, major in general studies, and spend my life in misery. I tell you what, the upside of that would be that I’d be free from all this pressure – free to persue the things that matter to me most.

I’m going on a cruise sometime soon (time is vague to me today) and I have no clothes for it. Just jeans and black t-shirts. Not exactly hot-weather clothing. However, I don’t want to shop for clothes because I have no style and I hate shopping. Pretty much, I wish I wasn’t going on the cruise at all, because I know it will just be one big stress, and I will end up in tears because I didn’t buy any clothes before the cruise and thus don’t have anything to wear.
I know, I shouldn’t stress so much, but I just take this as proof that I really should be in a padded room of some sort.

I was going to put a picture of Svara, whom I adore and love so very much, because she is always willing to curl up with me and let me bury my face in her soft grey and white fur, but this post is too depressing, so I’m not going to subject her loveliness to that.

If I were You I’d Probably Ignore this Post

Soooo… It’s been a really long time since I posted, and I feel bad. I do not like to neglect my blog so badly, but, I donno, I never think of it anymore. Hopefully I’ll get back into it. I am a very forgetful person – I only remember insignificant things that do not matter to most people. However, remembering to do my homework, buy milk, put my clothes in the dryer, and update my blog is completely beyond my power.

The whole firework thing? Ok, well it’s been way too long to talk about it now, so pretty much a firework shot right at me, bounced all around me off some walls, and then proceeded to explode in my face right as I opened my eyes to see if it was over. I was a little deaf and a little blind for a while, but I seem ok now. (Ok, of course, being at whatever state I normally am!)

Let’s see… The semester obviously started a long time ago, and overall I’m happy with my classes, with the exception of ochem of course. Heredity and evolution I am really enjoying, the teacher is very good and I love everything to do with genetics, especially all of the Punnett squares, alleles, sex-linkage, dominance, F1, F2, and etc. We’re doing Drosophila (fruit flies) right now, which is my second time, but it’s of course bumped up a level, so it’s a little more interesting and a little more complicated, but basically, it’s still FlyNapping the flies (remember that lovely smell, my friends) and spending far too long hunched over a microscope carefully ordering, reordering, counting, and recounting tiny twitching flies, before picking out 10 (5 female, 5 male) to produce the next generation, and drowning the rest in alcohol. And, because this is all college level now, making things harder involves having to come in at ungodly early hours in the morning to ‘harvest the virgins’ which sounds pleasantly devious, but really is not nearly as exciting as one might think.

Biomedical ethics is quite interesting, our teacher looks like he’s pretty fresh from grad school or getting his doctorate, but he knows his stuff, is layed back, and is not too bad at teaching (and only assigns 5 pages of reading a night), so it’s cool. French is pretty much like it was last semester, but moreso, since it’s II instead of I. Teacher still good, and I learned the other day that he apparently speaks German too. He’s my undercover ‘French Resistance’ Resistance SS Nazi teacher.

In other news… I still don’t have TV. I really need to do that. I wonder if they can install it in time for me to watch some of the winter olympics. Hmm..

Apart from all that, life just goes, as often happens. Things go up and down and sideways, and I continue to be confused in general about society and also why people do what they do, and why they act the way they do, and why I just don’t get it. This next remark is very specific, so chances are if you’re reading this it’s not for you and has nothing to do with anything you’re thinking of.
I can finally somewhat see the results of these last few years of life, and how things have turned out as far as myself and a few other people. A few years ago, I accused someone of being a conformist by dressing ‘alternatively’. They countered that I always preached being something different, yet I was the same as everyone else because I wore simply jeans and t-shirts, and thus was just an average joe. Back then, I couldn’t quite put into words (partially because I had no proof to back myself up then, as I do now) that dressing ‘alternatively’ can often be seen as trying to be different in dress because you’re conforming in every other way. If you want to be different, be different in actions, be different in the decisions you make, because that’s what’ll count. Now the years have past, the votes are in, and I can say that while I may still continue to dress in jeans and tshirts and they still continue to be ‘different’, their actions reflect those of the statistical majority in almost every way, while mine in many ways do not. In the end, I guess I was/am the different one after all. I just never made a whoop and holler about it. I’m not saying that being different is something special, it’s just something this person was particularly trying to achieve, and failed because they looked to do it in all the wrong places. It’s fairly easy to wear weird clothes and makeup – look at how many teens do it every day. It’s considerably harder to make decisions and/or have feelings that can sometimes, even often, alienate you from your peers. Again, let me emphasise that I’m in no way implying this is better – just that it’s different which is, obviously, the key theme here. Also let me mention that yes, there are different ways to be different, and I understand that. I’m not denying that this person has a distinct personality, they do, or that they don’t have the possibility to be different. Conformity stems from social pressure, fear, and apathy, and if you strain against any one of those, it’s easy to be different. Let me remind you that I’m talking in specifics here, and that my statements (I feel) are true for whom they are referring to. A third party testimony (not made directly to me, and thus not skewing the answer) has been the data that I needed as a control to show that my thoughts were not just my own, skewed by me being involved in the dispute.

And yes, to me life is just one big social and psychological experiment where I gather information about people, watch how the interact, make predictions, and see what happens – usually over many years. And yes, I’m doing this to you too.