Males of the Species!:

Do you wish you knew exactly what it was that women wanted? Have you always thought it would be great it if you could know what females look for in guys?

Well, today is your lucky day! Why? Because I am a female (indeed!) and I am willing to share with you secrets from my mind!

1. Shave with a Straight Razor – Come on, it’s just plain kick-ass. Who isn’t impressed by someone dragging a knife edge across their face to accomplish something useful? Plus, you get to do awesome things like use a waterstone, shaving brushes, and a leather strop. Who doesn’t like to relive a little history every morning? Additionally, the shave is supposed to be the closest you can get, and you’ll apparently save money on razors in the long run (though you’re going to have to be willing to put down $300 or so up front, sadly). Finally, as the dude in the video points out, if anyone attacks you while you are shaving, you can defend yourself! And we all know that’s a big danger in this day and age….
Learn how to shave with a straight razor by watching this amusing video.

2. Get Yourself a Kilt! – Nothing is hotter than a guy in a kilt. Take my word on that. And somehow Utilikilts are even hotter than traditional kilts, maybe just because they blend into today’s society a little less glaringly. Also, possibly because tartan has been somewhat adopted by the punk/gothic crowd. Anyway, my point is, you all need to get kilts. No matter who you are, a kilt automatically makes you hotter – it’s a proven fact! And I’m a scientist – I know what I’m talking about.

So, there you have it. Women want two things: straight razors and kilts*. Simple, right? Now, go order your kilt.

* My scientific study of “What women want” was based upon the amazing opinions from a group of women of sample size one who will remain anonymous but are totally not writing this blog post right now. Promise. Also, I’m not responsible for your failure if this doesn’t work out!

(This is a post I originally wrote a year ago, but I just unearthed it and it cracked me up (I often crack myself up), so I thought I’d share. Enjoy!)

You know, if you think about it, those ‘Girls Gone Wild’ videos must be a little bit of a let down. I mean, in the ads, there’s all these STARS popping out everywhere! It’s exciting! But I guess if you get the DVD, there are no stars – you just see the girls boobs. I donno, I guess maybe it’s cuz I have a pair myself, but that seems rather anti-climactic.

Why I don’t like my criminal justice textbook (The Criminal Justice System – Burns):

Quote from page 5 (minus source citations):

Seriously? Was there no better way to word this?
Hey executive editor Frank Mortimer (no joke) – you fail.

While Google-ing myself (oh, come-on, you all do it too!) I came across one of those old question things everyone used to post on blogs. You know the ones, where they had like 80 questions and you had to answer pointless weird questions about yourself.

Well anyway, I started reading through it, and began thinking it was a really interesting way of seeing how life had changed. It was from July 2004, which was when I was fresh out of high school and before I’d officially started at Southwestern. Oh, life since then!

So I re-posted the questions with my ‘modern day’ answers below the originals, in blue font. Take a look if you want, but maybe it was just mostly for me. Maybe in another 4 years I’ll go back and do it again : )

Posted in Uncategorized | No Responses »
Tags: humour, past, reflection, school

I thought I’d give a little post about something that’s amused me lately – my email. I regularly get emails from The Times (that would be the one based in London, not New York or whatever) due to a story I’m not going to explain. But I’ve been getting them for years now, so I’m somewhat fond of them, even though I rarely read them and just press ‘delete’.

Anyway, in the last week or so I’ve had a few that caused me slight amusement. Here’s three that arrived, in descending chronological order:

You can just hear the doom approaching, can’t you? I bet you never knew we needed to act now. Anyway, I realise now that I’m probably the only one that finds this funny. Oh well, I am attracted to the way it builds up.

In other news, I’m wondering if maybe the manager at Einstein’s searched ‘einstein’s bagels tcu’ and found my blog (and my recent post about Einstein’s) on the second results page, as recently he’s been very friendly, remembered my name, and made joking small talk with me. Also, another one of the regular girls has learned my name. I have no idea if he did read my blog post, or if that was just creepy coincidence. Either way, it’s nice, and I appreciate it.

I guess that’s about all that’s happening in my life at the moment. Pretty boring, really – just the norm. The Purple Bike Program is going great, for all those that care, and my only wish would be that I could spend more time on it. We’re going to start a donation site soon where people can encourage friends and family to donate (tax-deductible and carbon-footprint-reducing) money towards their ‘account’. When they hit $500, we order a Purple Bike they can use until they graduate. (Then it goes to the program.) We’ll still have the regular ‘check-out’ bikes, of course, but this is a good way to increase the fleet. The only sad thing is that the program itself won’t get the bikes until long after I’m gone, most likely.

Well, I’m in an exceptionally good mood right now, as I’ve just finished listening to my new CD – Strictly Sousa – a collection of Sousa marches performed by the Dallas Wind Symphony. I’ve always had a soft spot in my heart for marches and marching bands, despite being a self-declared hard-core orchestra geek. I always try to catch the WRR 101.1 March of the Day, which plays at the odd time of 7:35 every morning. (But, with my new CD, I need no longer depend on it to get my blood going in the morning!) It might be ‘Liberty Bell’, ‘Washington Post’, and ‘Stars and Stripes Forever’* every morning now : P. (And yes, I know those are the most generically enjoyed ones, but come on, they’re greatness. And anyway, I’m more experienced in string and full orchestras.)

So as for the title: You might be a classical music nerd if….
You collect your mail one night and are overjoyed because it contains
- A new CD of Sousa marches
- Sheet music from your orchestra director, asking you to look it over, come to any practice possible, and play in the next concert because he’s dangerously low on strings
- Your season ticket to the Ft Worth Symphony Orchestra’s Pops Concert Series

So that’s my excitement in life at the moment. Is there nothing classical music can’t do? Well, maybe classical music and programming combined. That might, in fact, be the recipe for life happiness.

All of you will be overjoyed, I know, to hear that Svara is safely back with me as of 7am this morning. My plane ended up getting in late last night, and I had to leave her another night, poor kitty. She seems very relieved to be back at home.

* I just realised I have no idea how to format music titles in writing. Italics? Quotes? If you know, let me know.

Be Safe, Kids – Say NO to Unhandled Exceptions

I managed to lighten my mood somewhat, so I thought I’d make a post of it. So what was this miracle, you ask? Why, programming, of course.

I was assigned a ‘lab’ yesterday that’s due in… two weeks. For those of you who don’t know, I’m in a brain-numbingly easy intro to programming class for a reason that’s too long of a story for me to bother telling you now.

So I decided to code the program tonight, and did. Met all the requirements and such. It’s a very simple Java applet that lets you divide numbers if you put them in boxes. (And another even stupider function.) Of course, if you try and parse a string to an int (or double) and it’s not all numbers, it throws an exception. Remember those? Of course, it doesn’t actually do much in the visible part of the program, so we were supposed to let those go. But I didn’t like all the angry red lines in NetBeans (and I also don’t like the idea of people trying to divide words in my ‘Number Divider’ without a scolding) so I handled that exception. Somehow, that gave me very much joy.

You can go marvel over the stupid simplicity and (required) eye-fucking colors of my little applet here: http://stuwww.tcu.edu/emmahodcroft/Lab4/Lab4.html

On a side-note, I realised the other day that my favorite Java and/or C++ segment of code would have to be else if. I think this is because it seems so reassuring. ‘Oh, that didn’t work out? Don’t worry! We have a back-up plan! Everything’s going to be fine!’ I like the idea of there being another option after something has failed.

You might think this relates specifically to now, but it doesn’t. I’ve always felt a little happiness at ‘else if‘s, I just never really realised why before.

This my logic:
The chances of me getting on Cash Cab are pretty much nil – I’ve never been to NY and I don’t think I’ll be going soon.
So, if I can’t get on Cash Cab and win a couple hundred, I figure I should sue the show for dangerous driving. I mean, hosting a game show while driving a cab can’t be safe. I also figure I’ll get much more money that way. Assuming I win, anyway.

Or, if they’ll fly me to New York and just have a go in the Cab, I’ll drop the case.

(The title of this post made me think of something else. When people write ‘i hate em’ in chat windows, it always makes me do a double-take, since I reflexively think of ‘Em’ as me.)

I’ve been meaning to post this picture for a while. It’s wonderful and true. For some reason it makes me think of Tripp, but it is true for any kitty-lover. 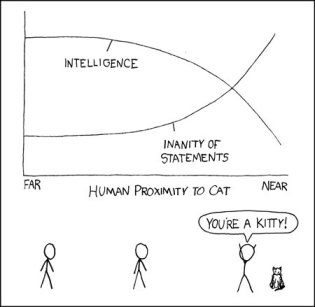 I think it may have come from xkcd.com, but I got it off some geeky facebook group, so I don’t know for sure. 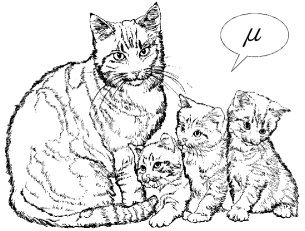 In other news, whatever.

Some Letters to God from Kids

Dear God,
I didn’t think orange went with purple until I saw the sunset you made on Tue. That was cool.
Eugene

Dear God,
Is reverend Coe a friend of yours, or do you just know him through business?
Donny

Dear God,
I do not think anybody could be a better God. Well I just want you to know but I am not just saying that because you are God.
Charles

Dear God,
It rained for our whole holiday and is my father mad! He said some things about you that people are not supposed to say. But I hope you will not hurt him anyway.
Your friend,
But I am not going to tell you who I am

Dear God,
I keep waiting for Spring but it never come yet. Don’t forget.
Mark

Dear God,
I am doing the best I can.
Frank